The news that my son had Down syndrome came at a bad time.  I was pregnant with our 6th child, and my husband and I were not on the same page about my pregnancy. Age 37, I qualified for extensive genetic testing that could identify the gender of my child at 11 weeks. I wanted to know—and to start planning for our new family member. I didn’t know the results would begin a different kind of preparation.

I got the news while visiting my younger sister in the hospital after she gave birth to her first baby, a girl. My doctor asked if it was a good time to call, and of course I said yes. He then told me that the test showed that my child had Down syndrome. He said he would refer me to Maternal Fetal Medicine for an ultrasound. He told me to store his number and to call any time with questions. Then he asked if I wanted to know my child’s gender and I said, “Oh, yes, yes I do.” He told me I was having a boy. I felt a tug in my chest; this was my first boy. I thanked him for his call and hung up.

There I was, in my sister’s hospital room, trying to figure out what to feel when I realized everyone was waiting for the news. I shook off any emotions and told them, “They think my baby has Down syndrome… but it’s a Boy!” No one knew what to say. I sat for a minute, my eyes fixed on that sweet baby girl. My other children were with me, and the youngest ones were so excited to know they were getting a baby brother. My oldest daughter asked a few questions and sat quietly with me on the ride home.

I felt completely alone. I didn’t call my husband because I felt like he wouldn’t say anything I needed to hear. I just wanted someone to tell me that everything was going to be okay. That night I shared the news with him, and this began an intense roller coaster of silence and arguing that lasted three days. I finally had the courage to tell my husband that he had a decision to make: Would he stay and support our family, or would he go? He opted to stay, but he coped with the news by staying in denial about the diagnosis of Down syndrome.

We went to our first ultrasound at Maternal Fetal Medicine, where they showed us the missing nasal bone and took some other measurements. They sent the results to my doctor, who reported that the baby also had a cyst on his brain that was considered normal and should fade in time. He gently told me that it wasn’t too late for other options. I briefly shared my husband’s desire to terminate the pregnancy because we already had so many children but that I just couldn’t. He asked me to give his number to my husband and to tell him to call if he had any questions or just needed to talk.

Each ultrasound provided new findings. As the months ticked by, we learned that our son had a pericardial effusion and some sort of calcification in his intestine. The 29-week ultrasound showed that the cyst was still there and identified a moderate dilation in his right ventricle and a moderate pericardial effusion. The 34-week ultrasound showed the same but with an increase in dilation and effusion; now they were talking potential Hydrops. I went for a fetal echocardiogram, which confirmed the ultrasound’s findings. My heart was heavy from worry, but I was beginning to accept that I was not in control.  I opted out of the fetal MRI. Everything I read made these results even scarier. I had my last ultrasound at 38 weeks and learned that the cyst and effusion were still there but that the dilation had returned to normal.

Two days later I went into labor, which went quickly. My purple little guy was placed on my tummy, and he let out a cry. I was so thankful to hear him cry. Once they got him to turn pink it was time to try nursing and with a bit of effort he latched on. I started to cry because this meant I would know when he needed me, and I could feed him. He had an echocardiogram before we went home.  The cardiologist felt confident that the few little holes identified in his heart valves would be stable enough to wait for re-examination at his one-month visit.

During that first month my son cried at appropriate times and, while it was challenging, he was nursing. At one month, the cardiologist told me that he didn’t need to see my son anymore. The holes were closing as expected, and the effusion was close to gone. In time his little blue feet regained their color and soon it was all just a memory. His development was a little bit slower than typical, but my son smiled, giggled, rolled over, crawled, stood up… and we celebrated. His sisters encouraged him, and we found joy in everything from his first giggle to his bowel movements. I never forgot what could have been, so we kept pressing on and encouraging him to be great.

While each ultrasound brought more anxiety about my child’s future, I used those moments to learn how to become what he would need me to be. I accepted that I was not in control of what was happening but that I could control how I thought about the experiences.

When Lincoln came into our lives, we had no idea that it would change our view of the world. We have a chance to teach and learn in every challenge we face. My family is learning sign language as a team. We are spending more time appreciating each other’s strengths, and we are teaching others along the way. When children ask questions about Lincoln, I have an opportunity to speak from love about my little guy before they have a chance to hear any other way. My son has the most contagious smile, and he continues to impress his therapists.

My son will be two this spring and he is standing on his own, walking with a walker, using multiple signs, and practicing with his voice constantly. He still ranks in the lower 25th percentile, compared with typically developing children, and we work with him daily to encourage his progress.

Has it been easy? Absolutely not! It has taken many therapy sessions and forced us out of our comfort zones. We have cried for him, and we have fears about his future. Being Lincoln’s mom has made me question everything about myself, but I wouldn’t change a thing. He is beautiful, loving, snuggly, smart, aware…. Above all else, he is my little boy.

In hindsight I am thankful for the way that every piece of our puzzle fell into place. This journey has pushed us to our limits and shown us that we can be okay. It gave us the opportunity to learn our boundaries, figure out what is worth fighting for, and that we are a team. I now advise others to open their minds and prepare for a new perspective on life. Your sadness is not wrong: It is real, and it will pass once you realize how much you have to celebrate. 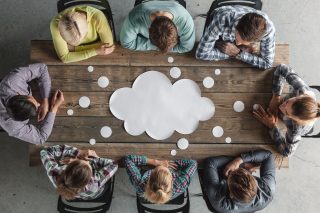